Expand Collapse
Answer:
The 63SA-4 and 63SA-7 include a overload protection circuit. If you exceed the power limits of the circuit, it will reduce the volume substantially. You need to turn down the volume to allow the circuit to reset and play at a lower level in the future.
The power level at which the protection activates can be adjusted by changing the value of the circuit protector which is accessible by removing the mid/high module. Different rated protectors can be purchased from James. However, bear in mind that increasing the power handling also reduces the protection afforded by the circuit in the first place. So if your speaker is unaccessible behind the ceiling material, you need to maintain a good level of protection.  You should discuss these options before changing the protection level.
Answer:

Answer:
If the QSC amp DIP switch settings are incorrect, you might have a low-cut filter turned on. The DIP switches are on the rear of the amp, and are under the DSP4 if the DSP4 has been installed. The default settings are: DIP-1 and DIP-10 are ON (to right) and DIP-2 through DIP-9 are OFF (to left).
Answer:

The QSC CX Series 70V amps used by James are professional grade amps and have an input sensitivity of approximately 1.2V for full output. Consumer level products may not be able to drive the QSC amp to full level. Normally, each amplifier is supplied with a DSP4 processor programmed with additional gain, making the QSC amp compatible with consumer output levels. If your installation requires additional gain, consult James on how to reprogram the DSP4 for more gain.

Our tests have proven on installations up to a 1000', signal loss is not detectable.

Any 70V speaker can be added to a 70V line as long as there is enough power available in the amp. However, there will be no control over the relative sound level from each speaker. In the case of the 31ODS70 and 62ODS70, the 62ODS70 will be about 8dB louder than the 31ODS70 so this needs to be considered when the sats are placed on the site.

Use the existing 1/2" tall trim rings and calculate the additional thickness you need to make up for the wall thickness. Purchase the SA-SP-0.125 1/8" thick spacer rings to make up this thickness and install with the trim ring. NOTE: you will also need longer screws. James stocks some lengths up to 2.5" - call to check stock.

We get at least one question per week about making a powerpipe tube longer or shorter, and ask if it is possible, or what the ramifications would be. It is important to realize that a powerpipe subwoofer is a completely integrated design including the transducer, enclosure and the tube, or port – it is a sophisticated tuned system. With that in mind, let’s look at how the tube, or port length, affects the performance. Powerpipes are a bandpass system, meaning their frequency response has a bandpass shape with a low frequency cutoff and a high frequency cut off.

In the graph below, the red curve is a perfectly tuned powerpipe. The 1W sensitivity is about 89dB, the lower -3dB point is around 25Hz and the upper -3dB point is 90 Hz – perfect for a subwoofer. 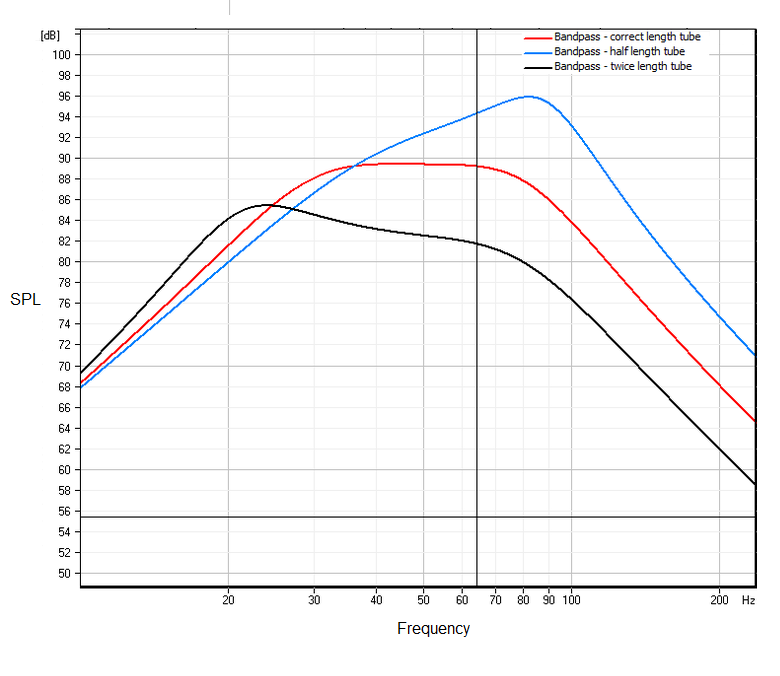 The two additional curves show the affect of using a tube which is half the correct length and twice the correct length. The longer tube (black curve) tunes the system much lower so some efficiency is lost, the lower cutoff has moved down, but so has the upper, and shape has tilted. The shorter tube (blue curve) has the opposite effect, raising the lower cutoff and raising the upper cutoff, while also raising the efficiency. Again, the curve is tilted but in the opposite direction. One thing not shown in the simulation is how much port noise is created in each tuning and at what frequency – so guessing which has the least audible affect is difficult.

So even though the tube lengths have been drastically altered, with judicial use of EQ and additional amplifier power, these 2 modified tubes might still be acceptable in an installation, so if you have no choice but to shorten or lengthen a tube by 50%, it might still work for you. But we recommended about a ±6-inch change to the tubes provided, which is always less than a 50% change.

If you need to run a very long distance, we can modify the port diameter and possibly get you the performance you need – please call the engineering group for more information.

The James complete warranty statement can be downloaded here.

Traditional 70V speakers will have a transformer as the load.  Because tranformers react differently to DC and AC signals, an ohm meter reading will measure the DC resistance (DCR) of the transformer and will not provide any info on the actual rating of the speaker when passing audio, and might even read near 4 or 8 ohms which might indicate incorrectly, it is a 4 or 8 ohm speaker.  In the audio band, the impedance presented by the transformer will be much greater than the DC resistance.

Unlike traditional 70V speakers, James Landscape sats, the AT series, also feature an additional low frequency roll off via a built-in network to protect the speaker as well as allow running the sats on the same line as a subwoofer.  These features block all DC signals, making an ohm-meter useless for testing as it will measure "open circuit" on both 4 ohm and 70V speakers.

So the speaker must be measured with an 70V IMPEDANCE METER which characterises the IMPEDANCE at 1kHz, not at DC RESISTANCE.  Examples follow the table.

Below is a table which shows impedance and DCR reading to be expected on AT sats and ST subwoofers.

Fig 1 shows three examples of 70V impedance measurement tools; the TOA  ZM-104A, the TENMA 72-6948, and the Dayton Audio DATS2 speaker testing software.  The two impedance meters test at only 1kHz which can give you readings which may appear out of spec, where as DATS2 gives you a full 20Hz to 20kHz impedance curve so you see all the data and read the frequency of interest.  DATS2 is our favorite as it works with a laptop, is small and also the cheapest of the options.

To show the versatility of DATS2, Fig 2 below shows a DATS2 curve run on a 32AT70 loudspeaker.  To get the same reading as an impedance meter, you would read the impedance at 1kHz o the graph, but as you can see, there is a wealth of information in the curve.  In this example, DATS2 is calling out about 281 ohms at 1 kHz, close to the 300 the impedance meters will read.

When this same transformer is loaded with a 4 ohm resisitive load, the reading is 140 ohms which is 5000/140 =3 5W, typical for a 30W rating.  So all contant voltage transformers, regardless if they are 25V, 70V or 100V, only have a nomial power rating at a nominal load impedance - results will vary in use!